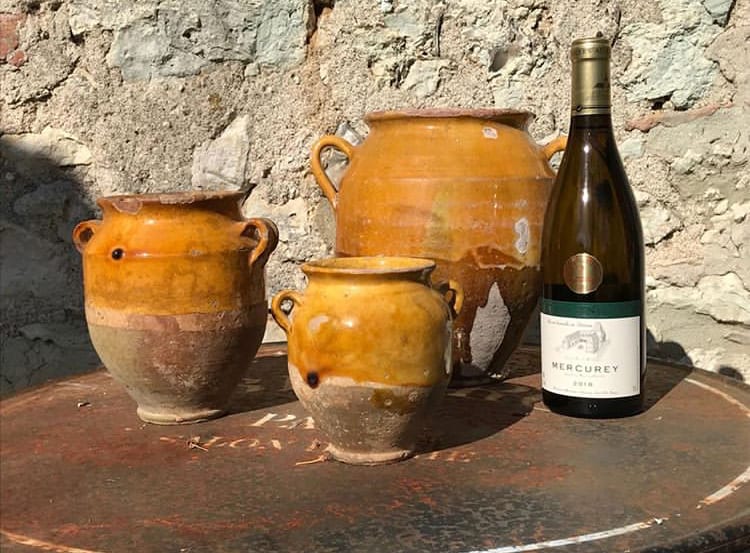 As anyone who has visited Green and Stone will know, the shop is filled to the rafters with art materials jostling for the attention of the artist in search of inspiration, and there is, of course, always something to be found. But not only is the shop like an enormous larder for artists needing to stock themselves up for several filling meals, it is also one of London’s premier curiosity shops, for within these walls there are laid out, with a keen curatorial eye, a delicious medley of antiques, ranging from primeval fossilised ammonites to comparatively contemporary late-nineteenth century French glassware and exquisite handmade English watercolour boxes, crafted by bewilderingly keen eyes. But my favourites, out of all these pieces of history are the confit pots, collected from markets in France. With their broad, shapely form and tough structure they are imposing pieces of pottery, with a profound utilitarian aura, but this does not detriment from their beauty, because it is their very toughness and lack of uptight delicacy in the application of the almost pungent mustard yellow glaze that makes them so full of character, exuding a rustic charm redolent of French provincial cooking and living, the sort expounded by Elizabeth David and so feverishly loved by Keith Floyd.

Confit is the French word that means “to preserve” and it is these mustard and sap green pots which were used for storing succulent cooked meats like confit d’oie (preserved goose) and confit de canard (preserved duck) which could later be made into cassoulet, for example. These pots were then buried in the cool ground or stored in larders. This storage process preserved the cooked meat without refrigeration and could then be enjoyed throughout the winter. The bottom halves were left unglazed for burying in the ground since the glaze would just fall off when buried in the ground. The glaze line marks the depth at which the pot was buried. Indeed, it is this half-glazed look which differentiates them most from other pots. Occasionally, you will see confit pots in a creamy off white, these pots were not buried and were covered in a full glaze and like many things once considered only worthy of the poor they are now considered incredibly swish. In those days modern refrigeration had not been invented, so confit pots were made in enormous numbers, indeed, they were the go-to nineteenth century preservation device, like Tupperware, or a Kilner jar. Nowadays, whilst the production methods of confit meats has hardly changed, the vessel in which confit is stored has, and so confit pots have lost their useful purpose, to tins and jars.

Like I said, the original purpose of these pots is now gone, and they are now only items of beauty and historical interest. But who first took interest in them, aesthetically speaking? Well, number one, would have to be Vincent van Gogh, who nearly always partnered his sunflowers with a mustardy pot, creating a wild exposition of yellow. In this sense, maybe van Gogh’s very own yellow confit pot is the most unwittingly famous pot in the world, seen by millions (billions?), caught in paint for all time. If you look carefully through van Gogh’s paintings you will see the pots appearing again and again, for example Still Life with a Plate of Onions features a sly green confit pot with a spout peeping out behind a table. Van Gogh painted his sunflowers in Arles, in the south of France, and it is the south-west region of Perigord nearby where confit is the noted speciality. Generally speaking, the green glazed pots come from north of the Loire, and yellow from south of the Loire. I think in some way the association with van Gogh is why the appeal of the pots is so strong, and also why unlike other pottery a chip is not considered detrimental, but rather characterful and beneficial to the object’s ability to tell a story. So, if you feel like your still life is lacking a certain je ne sais quoi, perhaps, a confit pot is the answer.

Confit pots come in all shapes and sizes, almost always with ring handles, but sometimes with spouts, and large arching handles.The smaller, more petite pots are rarer, more coveted, and more expensive, and the green glaze is less common than the powerful mustard glaze. As aesthetic objects the pots are superbly flexible, as an interior designer might say, “the potential is limitless”. You can use them to display flowers, paintbrushes, old bullrushes, or without, and simply on a shelf, perhaps next to a littler or bigger pot, making a pottery family. In some ways, there is nothing more tasteful! In seriousness, they truly are beautiful, and despite being created in vast quantities each one is unique and it is always a treat to see one. There are actually also bowls and pouring vessels with similar glazes, and they are equally beautiful and with similar histories. So, whether you buy one for yourself or for a friend, there is simply no better way of inserting a little piece of rural France into your home.