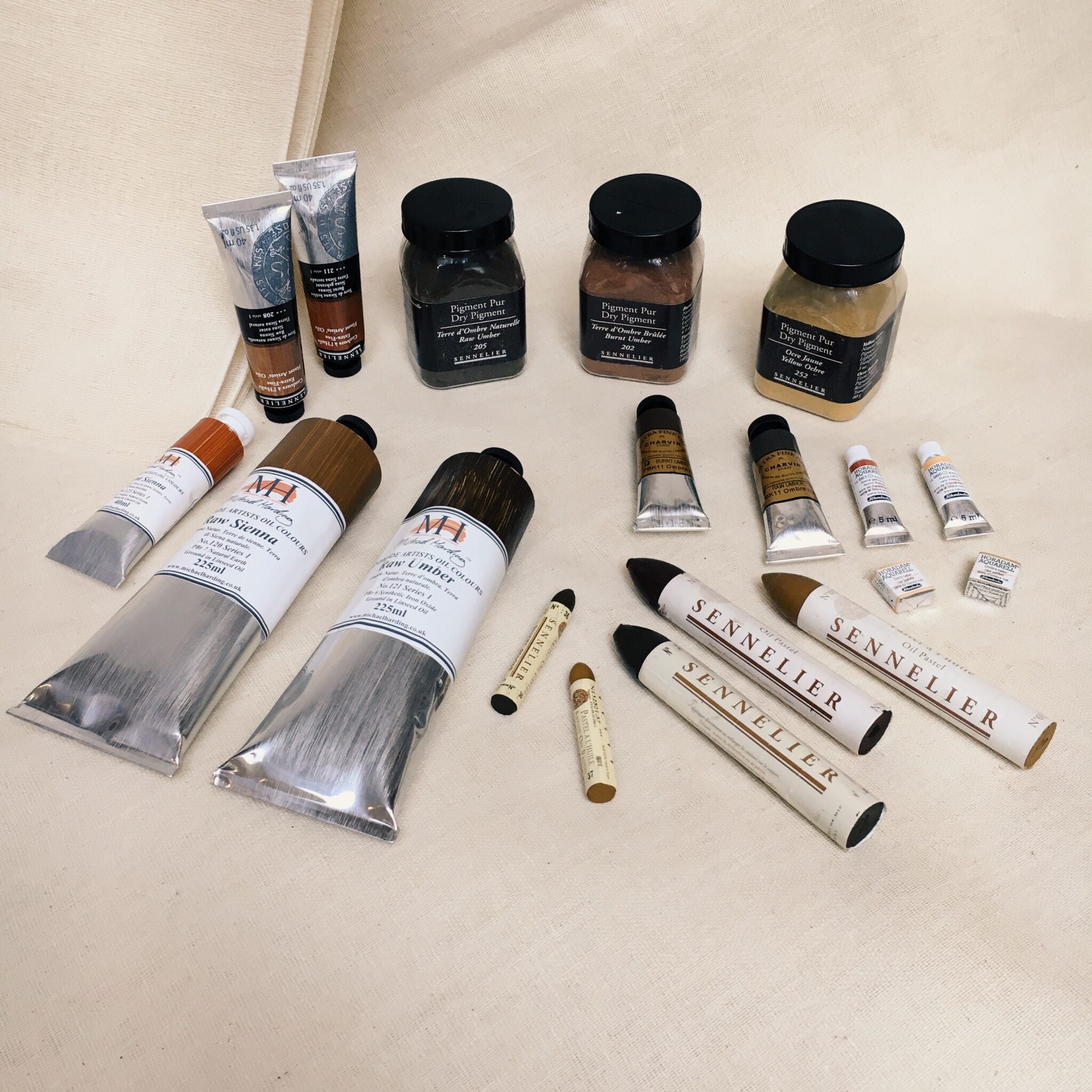 Brown pigments might not be the most glamorous of the bunch, but have no doubt, even though they’re taken from the earth, they sure ain’t just dirt!

The most common brown pigments used by painters in all mediums are the fabulous foursome of raw umber, raw sienna, burnt umber, and burnt sienna. These “earth colours” (as they are known) are extraordinarily useful for creating paintings full of subtle gradations from light to dark, whilst also allowing the painter to develop a natural sense of realism and authenticity, as well as richness and depth. The two raw colours have been used since prehistoric times, and all four have been used by artists’ ever since. For a bunch of colours you might associate with dreariness they are actually a surprisingly dynamic bunch with innumerable variations in hue, from yellows, to red, to greens, to blues. So without further ado, join me in looking at these four pigments, their histories, and their uses.

Raw sienna is a beautiful warm, ever so slightly creamy deep golden yellow, just a bit darker than yellow ochre, and just a little more opaque. As with the other three pigments it is stable in pretty much all binders – oil, watercolour, acrylic, etc. As the name suggests the original premium pigment was derived from Siena in Tuscany, and in this pigment there is a real sense of that place, with the colour being evocative of sun-baked landscapes blown through with dry winds. Nowadays the area around Siena has for the most part being exhausted of its supply of the pigment, though some is still to be found on the western slopes of Monte Amiata, Tuscany, where Daniel Smith gets his special selection for his Monte Amiata Natural Sienna (one of his seven sienna colours) and so does Michael Harding for his raw sienna oils. Until 1988 Winsor & Newton bought sienna pigments with a beautiful bright undertone from a mine south of Siena, after this they adopted transparent synthetic iron oxides which they consider to closely match the old standards. The pigment is still mined in Sicily and Sardinia as well as the Lehigh Gap in Pennsylvania. If you want to know if your paint is made of the real stuff, just look for the pigment number, and if genuine it will say PBr 7 (the same for burnt sienna, raw umber, and burnt umber because they are all made of pretty much the same components – iron oxide, manganese oxide – just in different quantities and additional mineral variations.

Raw sienna is especially useful as a ground tone and for underpainting. It is also excellent for creating skin tones and delicate yellow creams. Another good thing about raw sienna, especially in watercolour, is that when mixed with blue it doesn’t immediately turn into a blue, so when painting landscapes or a blue sky it is useful for glazing over the blue to create the effect of the warm light of the sun. The pigment was prized during the Renaissance because it’s so useful for portraiture, and that’s why around that time burnt sienna was developed.

Burnt sienna is the roasted or calcinated form of the raw pigment. This process dehydrates the present iron oxide and changes it to a warm fairly bright reddish-brown colour. Like raw sienna it is a very transparent paint with an excellent colour and is completely permanent and lightfast, and was used aplenty during the Renaissance. It is said that sienna from Italy has a slightly bluish shade whereas that from America is more yellow. Burnt sienna is a great colour for mixing, and might be the most dynamic of all the earth colours for it. Not only is it excellent for flesh tones, but when mixed with yellow it returns to a raw sienna or yellow ochre hue, mixed with blues like ultramarine or phthalo blue it turns into all sorts of pleasing greys, blues and browns, mixed with greens you can get all sorts of forest colours, and mixed with reds you enhance the colours to a rugged, strong earthy richness. Thinned down it works wonderfully as a warming glaze. Anything you add it to will be richer and more atmospheric for it. I use it as my ground tone in oil painting because I think it has a unique combination of warm brightness and depth of colour.

In contrast to the siennas there are the umbers which are darker browns. The name ‘umber’ is thought to have two possible points of origin. First is that the name comes from the Latin “ombra” for shadow because the pigment is very useful for rendering shadows. The other explanation is that the original pigment was derived from Umbria in Italy. I think the shadow idea is more likely! Umber occurs in a limited number of geographical regions where its colour can range from a dark brown, a more greenish brown, and even a slightly violet brown. The best umber, which has an especially dark, rich, and slightly olive-green shade, comes from Cyprus at Margi, just west of Nicosia. There is umber in England, but people complain it’s too gritty.

Tonally, raw umber is cool and dark whereas burnt umber, which like burnt sienna is just the raw pigment roasted, is a darker, redder colour, without the coolness or the green hint of the raw equivalent. As one 17th century man said raw umber changes from ‘being A fowle and gressie Coullerr, [THAT’S HIS OPINION NOT MINE] iff when you haue bought itt you burne itt in A Crusible or Goldsmiths pott, itt is Clensed [it really is a transformation!]’. Umber is a key element of chiaroscuro painting, and was central to Caravaggio’s palette, as well as Rembrandt’s, who used it to make all of his sumptuous and complex browns. One thing to remember about umber (in oils) is that it dries especially fast and so it is very useful as a ground to work quickly on whilst it also speeds the drying of other pigments it is mixed with. Vermeer was also a big fan because it was excellent for creating shadows in his quiet interior paintings, whilst it was completely widespread in Dutch landscape painting of the same period. Umber is a useful alternative to black, the addition of it in a mix or a painting is much less harsh.

Like burnt sienna, raw umber and burnt umber are absolutely top notch for creating a tonal ground and blocking in when painting, especially in oil. Using a raw umber ground, perhaps with a touch of white will create an overall effect in your painting of a cooler tone and it works really well if you like a painting with subtle, muted tones. In contrast, painting a ground of burnt umber will add a strong warm undertone. This is really one of the strengths of these colours, you can use them to create helpful tonal sketches before embarking on a full scale painting. A classic combination is burnt sienna and burnt umber, with the sienna in varying thicknesses of application marking out light and mid-tone patches, and the umber cooling and marking out the darker areas. Using these colours for an undertone will really make your painting shine, glow, and be generally more moody and swish! If you have only ever painted on a white surface (as all canvases are) remember that in the past to do so really was considered unusual, give an undertone a go! And if you’re somehow worried by browns remember Rembrandt was a big fan of all four of these colours, and used them almost continually. Looking at his paintings you will note, they really are very brown, but he has used them, being the genius he was, in such a way that he has brought the brown alive! You can do it too! Also, one last thing to note, from personal experience, I just love the creamy and kinda stoney sludginess that you get from mixing umber with a bit of white, it’s kind of aged and classy…

Now, of course, some great painters have not been a fan of browns, and yer know what, there is some reason. The Impressionists, for example, were not keen and said the earth colours were old and dull and would not be allowed on their palette. Instead, they would mix their own browns if need be. I think this criticism is reasonably valid, because when used badly or obsessively (I’m not going to point any fingers) they can seem stale.

One word I’ve used again and again in this post is “rich”, and that’s because quite simply, by using these colours your paintings will be richer! These colours are indispensable! Use them!

If you would like to see some other blogs about pigments or colours see: